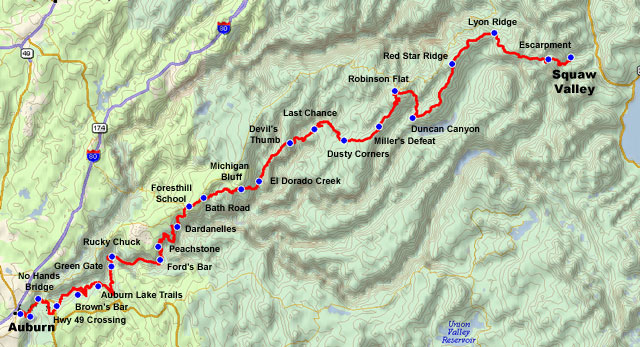 0-3.  While the lottery odds have conspired against gaining entry for myself the past three years, Western States can't keep me away and last Friday I drove up to Squaw to crew and pace for the fourth time in the past five years.  This was to be the third time I'd be pacing my buddy Matt Searfus (Surf) in a 100 miler (once prior at States, once at Rio del Lago), who's lottery luck is much better than mine at 2-3!  After running a 23:01 at RdL last fall and a good block of training, he came into States uninjured and ready to push for that 24-hour finish and a Silver Buckle.

We all met up for lunch and discussed the crew and pacing plan for the following day.  Jim Hammond would be running from Foresthill (mile 62)  to the river (78), as I'd done in 2014 I'd take Surf across the river and up to Hwy 49 (93.5), and then his wife Becky would run him in to the finish.  Surf and Becky had their kids in tow, so I volunteered to accompany Becky and the kids to the aid stations at Robinson Flat (32) and Michigan Bluff (55).  Jim, his wife Jennifer, and two rookies to crewing ultras Jared and Ryan would hit the other side of the canyon and crew at Duncan Canyon (23.8) and Dusty Corners (38), and then we'd all meet up again at Foresthill (62).


We relaxed that night in a condo outside Tahoe City, eating pizza and drinking a beer or two to relax before we all hit the sack early.  That 3:30 AM alarm would kick off a very, very long day for not only our runner, but for all of the crew as well.

We got to the start at Squaw around 4:30 AM, and Jen and I hiked up the hill a bit to watch Surf and the rest of the field begin the 4 miles climb to the Escarpment.  So much excitement and nervous energy.

Unfortunately Surf's race didn't unfold as he'd hoped.  When we first saw him at Robinson Flat (mile 32), his stomach had been giving him issues and he'd only taken in a single gel in the prior couple of hours, so he was falling behind the 24-hour pace.  That issue would stay with him until he got out of the high country and to a lower altitude, and he started feeling better.  But then coming into Michigan Bluff (mile 55) he developed pain in the back of his knee.  I walked him in to the aid station and suggested he get it looked at and worked on by the chiropractic and medical volunteers there.  So onto Gordy Ainsleigh's chiropractic table he went!  Gordy had started the race but pulled the plug within a couple of miles and walked back down to the start, so he spent the rest of the day volunteering at aid stations.  They worked on him a bit, taped him up,and sent him on his way but he was struggling.


He picked it up a bit and was feeling better coming into Foresthill, and he and Jim headed off down the Cal St. section of trail.


I drove off to the Drivers Flat parking area where'd I'd be catching the shuttle down to Rucky Chucky later that night to begin my pacing duties, and tried to get a little sleep in the back of the car.

At 11:30 I headed down in the shuttle to Rucky Chucky, and the rest of the crew joined up a little later. At about 1:15 AM Surf came in, and after he refilled the bottles and fueled up we put on the life jackets and waded into the river to continue the journey on toward Auburn.

The fifteen or so miles that we ran together were pretty uneventful.  We talked some, ran and hiked in silence some.  He had long since given up on the 24 hour goal, but was also in no danger of missing cutoffs so he just kept moving, albeit slowly.  At one point he expressed frustration in his faulty knee as the section of trail was so runnable, but he just wasn't able to get it in gear.  As we hit the fire road before the climb up to Highway 49 I moved from running behind him to up in front and slowly picked up the pace a bit, and he hung on and did the same.  After almost five hours we came into the aid station and we sent him off with Becky toward the finish.

We headed out to Placer High to await his arrival with his two boys in tow.  Surf rolled onto the track at just over the twenty-seven hour mark, and I sent the boys out to join him over the final 300 meters to the finish line.  Great moment for him and his family!  So proud to witness him gutting it out and just getting it done on a day that didn't go how he'd hoped it would.  Huge props to him, he is one tough and inspiring dude.


It is so rewarding to have had the opportunity to share in this experience with him again, and I know he hopes to be able to repay the favor someday!


Outside of Surf's race were 353 other stories.  Just a few of them:

*  What a story it was that played out with Walmsley all day. There were a few guys running with him early (Sage Canaday primarily), but he took the lead about 10 miles in and just hammered it, putting time on the rest of the field and the course record.  I kept hearing words like "unprecedented" and "incredible" and "awe inspiring" as people that were at the aid stations when he came through tried to describe what they saw.  IRunFar said, "His effort seemed inhuman–truly asking all of us observing at aid stations to plausibly reset the definitions of what is possible." Look at his splits on Strava up through mile 90 - there's a whole lot of sub-7:00s and sub-8:00s in there.  He even dropped his pacer on the way down to the river about mile 71 - a professional runner could only keep up with him for 7-8 miles on the Cal St. trail, while he already had 62+ miles in his legs.  But then at about mile 92 instead of heading up a hill to the HWY 49 aid station he missed a turn, and ran along the river and came out about two miles down 49 from the aid station. He obviously felt a little defeated at that point, seeing the race of a (anyone's!) lifetime slip away.  He pretty much walked back, retracing his steps, walked up to the aid station and sat for 15-20 minutes before continuing on, and he ended up finishing in 20th place overall.

*  The other piece of the Walmsley story was his river crossing.  For those that aren't familiar, at Mile 78 you hit the Rucky Chucky aid station at the American River.  There is a dam upstream, and every morning they let out a bunch of water so that there is enough flow for the rafters that frequent this area.  So the water is fairly high and fast in the morning, and gradually drops throughout the day.  You wade through with the help of a cable with volunteers helping to guide you across - it's been a little over waist high at it's deepest point all three times I've crossed as a pacer.  It's pretty common for the lead runners to jump in for a minute and submerge themselves to try and cool off, as it's still hot and sunny when they get there.  So Walmsley shows up, gets the life jacket put on, and wades in - the volunteers just think he's cooling off.  But then he just starts swimming across and the current sweeps him down stream.  The safety raft takes off after him, but he finally makes it over to the side.

Here's iRunFar's video of the whole thing (turn down if at work, Bryon drops an F bomb at the beginning).

Towards the end you can hear people yelling, "don't get in the raft" and "don't help him".  Why would they be yelling that you ask?  Well....

*  In 2006 Brian Morrison was training regularly up in Seattle with Scott Jurek, who had just won the race 7 times in a row.  Scott wasn't going back that year and predicted Brian would win, paced him for much of the way, and sure enough Brian hit the track in Auburn about 15 minutes ahead of second place.  But then this happened.

Because he was helped up and assisted across the finish line, he was disqualified and is officially listed as a DNF at Robie Point at mile 98.9 (last aid station before the finish).  Brian came back the next three years but never completed the race (nutrition, cancellation, injury I believe).  But he was back this year, 10 years later.  He was introduced at the pre-race meeting on Friday along with the elites, and everyone gave him a huge hand.  It was an emotional moment, with him wiping away tears.  We actually saw him several times throughout the race as he was running near Surf most of the day, and they knew each other from the running store in Seattle that Brian manages.  Well Brian finally managed to finish Western States, crossing the line with his kids in 27:26.  Huge hand from the crowd, great moment.

*  As the clock wound down the final minutes during the "Golden Hour of Ultrarunning", the runners that have been out there all day, night, and into another hot day start streaming in.  In the final hour sixty-four of the two hundred eighty total finishers, or 23% of the total, came in and crossed the finish.  Those stories are always the best - Alison Sunshine Chavez, a breast cancer survivor being paced by Chris Jones; Annie Trent, the 26 year old daughter of one of the WS board members; three 60 years olds - and most are joined on the track by not only their pacers but their crew, family, and friends.  There were two 70 year olds that had started - 71 year old Gunhild Swanson, who had the amazing finish last year with 6 seconds to spare, and 72-year old Wally Hesseltine.  This time around Gunhild missed the cutoff at the river (how's this for a picture - Gordy Ainsleigh, Gunhild, and Ann Trason as her day ends at mile 72), but Wally was still coming.  As we got to the final moments a cheer erupted from the road outside the track, and Wally finally came down the ramp.  But unlike Gunhild running a sub-8:00 final mile to sneak in under the wire, Wally was in bad shape, leaning badly to one side and stumbling.  He crashed into a garbage can on the ramp and fell down.  He got up and kept moving, but time ran out after just a few more steps, probably 200 meters from the finish line.  He kept trying to go, leaning and falling again, then again.  Everyone in the crowd is chanting "Wally, Wally", just like they had chanted Brian's name back in 2006.  On the straight away he fell once more, and had to be helped to his feet and across the line.  Totally sad moment, and yet inspiring at the same time.  He was one of three runners that came in after the official cutoff, and while Tropical John announced their names and said they "covered the distance", they don't go down as official finishers but DNFs at Robie Point.

There are a a few hundred more stories, but that's enough for here and now since I know not everybody (ok,very few people) are as in to this race as I am.  Every time I get the chance to experience this race, it becomes more a part of me and I become even more determined to run it some day.  I'll be back in Auburn this December for my 4th straight lottery, maybe 2017 will be my year!
Posted by SFBayDuck at 5:59 PM 2 comments: