Crewing and Spectating at Western States, and the Greatest Finish Ever 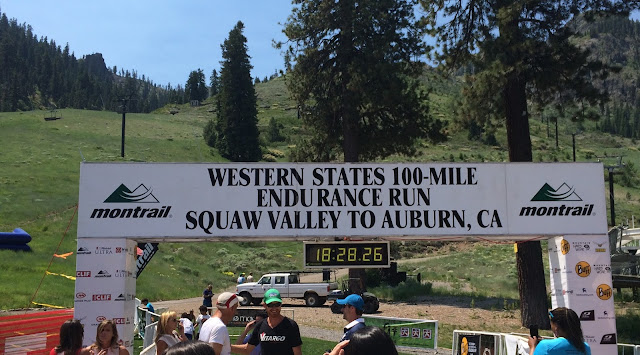 Crewing and pacing two college buddies in the 2012 and 2014 editions of the Western States 100 Mile Endurance Run has fed my obsession with this epic event, making it number one on the race bucket list.  While I'm hoping the third time is the charm this December in getting in via the lottery, I wanted to head up and be a part of the 2015 edition of the race in any way I could.  I'm all out of fraternity brothers that run 100 milers and didn't have any luck with my Bay Area network of finding a runner to help, so I was planning on either just spectating or trying to volunteer.  But about two weeks prior I threw up a post on the event Facebook page, and within an hour had a response from a UK runner that was coming to Squaw by himself, happy to have some help.  So there I was at the track in Auburn on the last Friday in June picking up my runner and heading up the mountain to Squaw.

But let's first jump to the end of the race.  From 10:00 AM - 11:00 AM and the thirty hour cutoff on Sunday has been called "The Golden Hour" and "The Greatest Hour in Ultrarunning".  And this year more than lived up to the billing.  I sat by the entrance to the Placer High School track for the last 90 minutes or so, watching the runners that had been out there through two sunrises and a full night enter the track with their pacers, crew, and families.  I found myself getting teary eyed more than once as people celebrated this amazing accomplishment on their run around two-thirds of the track to the finish.  As time wound down, legend Tim Twietmeyer came over to where a few of us were anxiously awaiting any final runners, and said that there were two runners still on the course that had a chance, with the second being 70-year old Gunhild Swanson.  Just before 10:58 AM a runner named John Corey hit the track with all of us exhorting "Go, go, go!"  About 30 seconds after him in came Gunhild, accompanied by winner Rob Krar who had gone up to Robie Point in his flip-flops to help run her in.  Those assembled were now screaming, "You gotta go, you gotta go!  Go!" Several of us ran across the infield to the finish to see John cross with 30 seconds to spare, and then Gunhild hit the finish line at 10:59:54 - SIX SECONDS TO SPARE!  The crowd exploded, strangers hugging, people crying and cheering.  Western States released a great video of it, and I captured it from my spot as well:


A moment that no one there will ever forget, to be sure.

Saturday morning saw 371 brave souls take off on the 100.2 mile journey.  I took off to Robinson Flat to meet my runner, arriving a few hours before he was scheduled to arrive to spectate and watch the race unfold.  I missed the top 10 or so men but saw the women's leaders and then about two-thirds of the field come through waiting for my runner, who struggled early with the heat and arrived just 45 minutes ahead of the cutoff.  We got him in and out of there fairly quickly, and I headed back down to Foresthill to watch the front of the race.

Foresthill is what I imagine the big European trail races to be like - people lined along both sides of the road cheering runners along, drinking beers, and ringing cowbells.  I ran into some fellow Pine-to-Palm 100 alums and posted up in a shady spot near them, and was able to see both the men's and women's leaders come through with leads they would hold all the way to Auburn.


After several hours at Foresthill it was off to Michigan Bluff to meet up with my runner again.  From the online tracking I could see that he was losing time to the cutoffs, so after resting for a bit in my mobile crew station, I headed down into the aid station.

Michigan Bluff is another big Aid Station, and a key point as runners struggle up out of the canyon on a pretty rough climb.  As time ticked toward the cutoffs, crews and pacers anxiously awaited seeing their runners come down the fire road.

My runner finally came in at 9:30 PM, just 15 minutes ahead of the cutoff, and left with just 3 minutes to spare.  We decided I would start pacing him at Foresthill instead of Rucky Chucky, and I told him he had to pick things up a bit if he was going to make it.  I drove back to town and changed, filled my hydration pack, and tried to rest a bit before pacing 38 miles to the finish.  Unfortunately, as the 11:45 PM cutoff neared and with no runner in site, I knew I was all dressed up with nowhere to run.  I headed out toward Bath Road to meet him, and brought him in to the aid station about 13 minutes late, his race over at 62 miles.

The silver lining was that I was able to get back to the finish line in Auburn to catch several runners coming in sub-24.  Most notable for me was my friend Erika Lindland moving up from her 11th place finish two years ago to finishing 9th this year!  So excited for her, what a smart race she ran moving up the field and making up around 50 minutes on the women ahead of her from Foresthill to the finish.    I then took a nap in the car for a bit before heading back to the track to watch runners trickle in, all the way until that incredible final two minutes.

Posted by SFBayDuck at 6:16 PM No comments: